In recent years there has been an increasing demand from students for Music programmes at Ara to expand further on aspects of music production and creation including writing of advertising jingles, film scores and gaming soundtracks alongside the mainstay programme which develops students into great performers.

To meet the demand, from 2022, the Ara Bachelor of Music will be available to the musically-inclined across two new pathways: Music Creation and Music Production, as well as the existing focus area of Music Performance.

Andrew Snell, Manager Performing Arts at Ara says, “In the past, all our students went through the same basic pathway for three years. This has become more and more difficult, as students want to look at different elements of the music industry, and have more choice. So, in response, we developed these three separate ‘pathways’ that go all the way through the degree.”

This choice will allow students to specialise in the area they’re passionate about, while learning alongside and working with musicians from other pathways.

This expansion of options is driven by a number of industry-based factors, not the least of which is the growing integration of digital technology into music creation and performance. Producers can add computerised instruments, layer an artist’s voice over itself to provide more depth and apply techniques to create music that is more engineered than ever before.

Snell’s of the opinion that the term composition has been superseded by the phrase ‘music creation’ a technological process that means that some of the more well-known modern soundtrack ‘composers’ have created hundreds of movie scores, but never written piece of music using a score and traditional musical notation. The laptop can be an instrument,” he says. 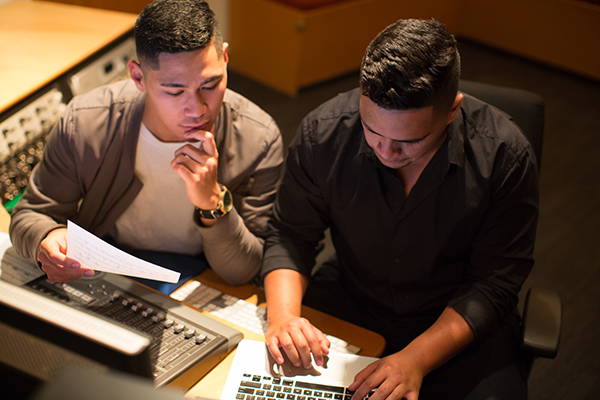 These developments are also reflected in the new NCEA subjects being proposed for secondary schools, meaning that many school leavers entering into the Music programme at Ara will have already studied ‘music creation’ before they come into the degree programme.

“This new approach has also influenced our application processes too,” Snell says. “In the past everyone had to do a performance audition, but if you're coming in as a composer or producer, you're not necessarily playing an instrument. So, in cases like this, you would provide us with a portfolio of work similar to what applicants produce for Ara’s Bachelor of Design programme.”

While the expansion of streams within the Music degree lends itself more readily to specialised talents and interests, the program is still concerned with producing multi-skilled graduates who can adapt to the ever-evolving music scene and find work across a variety of roles. Well over half the programme content is practical in nature, a higher proportion than most music degrees in New Zealand.

Snell comments, “In today’s music industry, every student, no matter what they do, has to learn the basics of sound, how to set up a PA, how to do a basic sound recording; those kinds of things, because you can't survive in the industry now if you can't do that stuff. In addition, the kinds of inter-personal skills that get you regular work; they've always been a really important part of the program, but they're now actually an explicit part of what we offer.”

Andrew sums up the changes to Ara’s Music degree by saying “It's about trying to give people as many additional skills attached to their core focus as possible, making them as employable as possible. We’re wanting to produce music professionals who excel in what can be a really competitive industry.”