On Tuesday night, the Ara training kitchens were bustling with hopeful young chefs, competing in the South Island regional cook-offs. This event, a brand-new format, was a collaboration between Nestle Professional, the Australian Culinary Federation and the New Zealand Chefs association.

On the official Nestle website, the company stated that “An amazing level of young chefs signed up for the 2021 action… Each chef will create two courses (main and dessert), to be prepared, cooked, and served in 2.5 hours.”

This is designed to find one winner per region across New Zealand and Australia (12 individuals in total) to proceed to Round Three;  the ultimate culinary showdown at Fine Food Australia, held in Sydney this September. The winner of this event will be recognised as ‘Golden Chef of the Year’ and will receive a fabulous $10,000 cash prize.

This week’s event, the southern regional semi-finals, was conducted at Ara Institute of Canterbury, with two heats of hopefuls up for assessment on the day, producing a main and dessert. While the atmosphere was calm but active, the pace picked up as the clock counted down the minutes at the front of the room. Each contestant had their own workstation, burners and ovens to use, as well as easy access to key ingredients stacked within easy reach.

Judge Darren Wright, formerly of Chillingworth Road, said that the judges were assessing more than just the finished product; they were also taking a close look at professional practices, including hygienic measures to avoid issues such as cross-contamination. Obviously, originality and flair were a large consideration in judging the dishes, as well as presentation and taste. 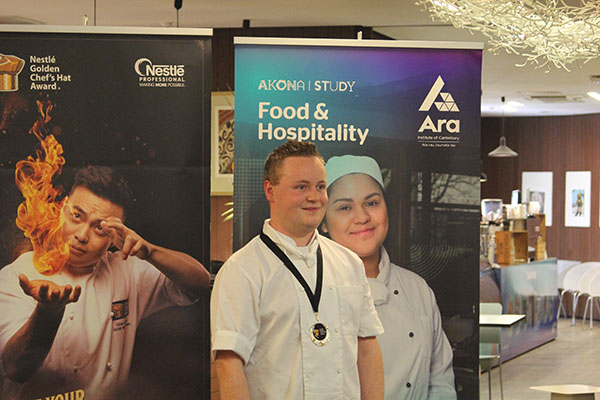 The winner of the South Island regional final was Jamie Jackson, who previously won a Bronze medal at last year’s competition. Jamie is an Ara graduate, and he will be joining the 11 other regional winners to proceed onto the finals in Sydney. As a regional winner, Jamie will also also receive a $250 restaurant voucher and a kitchen equipment prize courtesy of SOLIDTEKNICS.

There were three other bronze medals awarded for out-of-Christchurch competitors.